India’s rate of economic growth is expected to follow China’s trajectory within the next 20 years, according to a recent US Intelligence report.[1] This may not be far-fetched considering the following: India has the third largest economy in Asia, [2] with a population of over one billion; a rapidly growing middle class; and meteoric rise of its information technology industry, characterized by India’s Silicon Valley in Bangalore. In an effort to continue its burgeoning economy, India is positioning itself as a viable alternative to China and is gradually shoring up trade and investments in Africa. As a result, it came as little surprise when the President of India, Shri Pranab invited Egypt’s first freely elected President, Mohamed Morsi to India for a series of high-level delegation meetings in March of 2013. President Morsi met with Prime Minister Manmohan Singh on March 19th, to discuss bilateral relations covering strategic areas such as: military, crude oil, small and medium size enterprises, and information technology; along with fellowships for Egypt’s aspiring engineers to study in India. [3]Prime Minister Singh was clear on his vision for India and Egypt’s relationship when he stated that Egypt’s location, “as a bridge between Asia and Africa, astride a major global trade route, together with its skilled human resources, makes it an attractive business destination for India.”[4] Strengthening ties between New Delhi and Cairo fit well within President Morsi‘s aspirations to reduce dependency on the West, by looking east to bolster economic support and India is increasingly becoming the perfect suitor.

There was significant hope for change when 83-year-old autocrat Hosni Mubarak, was ousted on February 11, 2011, after 30 years in office. Since then, there has been increased political and economic instability in Egypt. Egypt’s first free elections in June 2012 ushered in candidate Mohammed Morsi, of the Freedom and Justice Party. Strong links with the Muslim Brotherhood, agitated secularist urban youth; moderate Muslims; and opposition groups, such as the National Salvation Front, who played a key role in the revolution. The controversial declaration made in November 2012 by President Morsi, [5]expanded his legislative powers, eliminated judicial oversight review of his acts, and pushed for an Islamist agenda. In response to the declaration, numerous protests and violent clashes across Egypt, such as the torching of the ruling party offices in Suez, Alexandria, and the arrest of Satirist, Bassem Youssef, after he poked fun at Egypt’s political class in the skits. In March 2013, one of the worst clashes occurred between supporters of the Muslim Brotherhood and opposition protesters, where at least 200 people were injured due to street battles. Two days later, President Morsi responded to this civil unrest with a vague, yet stern warning aimed at the opposition, “If I have to do what is necessary to protect this nation I will, and I am afraid that I may be close to doing so…I will do so very, very soon. Sooner than those trying to shake the image of this nation think.” [6] Egypt’s political woes continue to mirror economic concerns. The current fuel shortages have led to oil imports on credit from Libya; Moody’s rating agency downgraded Egypt’s credit rating[7] on March 23, 2013, while its foreign currency reserves have shrunk from US $36 billion in 2011 to US $13.4 billion 2013;[8] Unemployment has increased to 13 percent in the fourth quarter of 2012[9] and approximately 500 factories have closed throughout the country. This has put an estimated 10,000 employees out of business contributing to the national unemployment rate of 13 percent in the fourth quarter of 2012. At the time of this article, the International Monetary Fund (IMF) has yet to give the green light for the US $4.8 billion dollar aid package that it was promised Egypt in November 2012.

The government under President Mohamed Morsi, led by the Muslim Brotherhood, has maximized its factional power, yet failed to engage the opposition with any meaningful reforms or governance to mend ideological discord. While the opposition rejects the Muslim Brotherhood’s conservative political posturing, it appears to want to see greater autonomy from both Western and Islamist influences. It is starving for an orientation that is more about the Egyptian people. This growing polarization in Egypt has produced an unyielding political crisis that makes addressing the country’s interlinked economic and social challenges impossible to overcome. 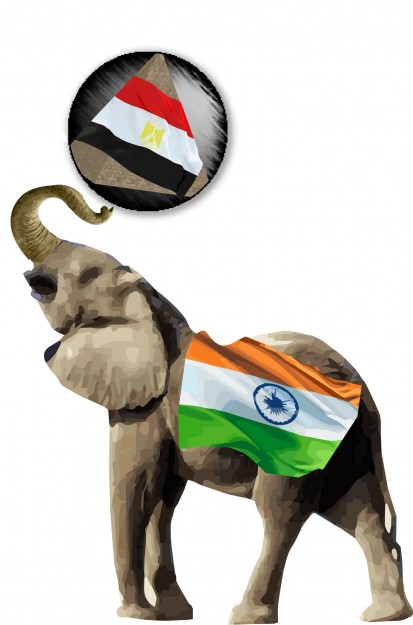 Can India give Egypt the lift it needs?

With the civil unrest that followed the revolution that overthrew autocratic President Mubarak in February 2011, President Morsi has struggled to restore investor confidence, which has since suffered sharply. Egypt being one of the largest recipients of U.S. foreign aid has yet to receive that aid. This is due to the growing sentiments by certain members of Congress[11]  to reduce or withhold the US $1.5 billion aid package altogether until Egypt stabilizes itself or until the Muslim Brotherhood relinquishes power.[12]  This narrow view and reluctance by the U.S. to disburse aid to Egypt has emboldened President Morsi to intensify and attract investors– particularly from India. Prime Minister Singh Manmohan has conveyed India’s full support to Morsi and offered to “share our [India’s] experience as he [President Morsi] ably leads his nation in building strong institutions and frameworks for democracy, social justice, and inclusive economic development.”[13]

India has conveyed this commitment by not being deterred by Egypt’s political transition to Democracy. It is looking to double trade and investments with Egypt currently from US $5.4 Billion to US $10 Billion “within the next few years,” stated Prime Minister Manmohan Singh during bilateral talks with President Mohamed Morsi[14] in March 2013. Prime Minister Singh’s projection for bilateral trade trajectory with Egypt is not far-fetched, considering trade between these two countries has grown significantly from US $2.5 billion in 2006-07 to US $4.3 billion in 2011-12, according to Egypt’s Central Agency for Public Mobilization and Statistics (CAPMAS). [15] India is the 7th largest trading partner of Egypt and the second most important destination for its exports,[16] with about 50 investments and projects across the country. Indian companies investing in Egypt cover areas such as: energy, agriculture, biotechnology and information technology. To date, the Sanmar Group has invested approximately US $1.3 billion at Port Said, Egypt and setup chlor-alkali and PVC facilities employing over 1,500 Egyptian workers.[17] The Egypt-India Polyester Company (EIPET) has invested US $250 million in a major polyester resin plant that will produce a raw material needed to make plastic bottles and containers. Another major Indian company operating in Egypt for over four decades is Kirloskar Brothers, a fluid management company whose pumps are a household name in Egyptian agriculture.[18] On April 1, 2013, Kirloskar Brothers signed a memorandum of understanding (MoU) with the Government of Egypt, Mechanical and Electrical Department and the Ministry of Water Resource and Irrigation, to build and upgrade the skill sets of engineers and technicians as training is slated to begin May 2013.[19] The conclusion of the bilateral talks held in March 2013, brought forth the signing seven agreements between India and Egypt: MoU in the field of cyber security; setting up of a Centre for Excellence in IT (CEIT) in Egypt’s Al Azhar University; cooperation in the field of protection of intellectual property rights; and prevention of illicit traffic of antiquities besides others. Other MoU includes e-governance and e-education, IT and electronics hardware, sharing of experiences in the creation of Technology Parks and IT clusters, and strengthening the cooperation between ICT companies in the private sector. These, among others can provide Egypt with the economic activity it needs to stabilize itself.

Rekindling bilateral relations with Egypt boosts India’s positioning to play a more strategic role in the Middle East and increase its resource acquisition into Africa because Egypt is both a pivotal player in North Africa and the Middle East. Currently, Egypt is still the largest non-OPEC oil producer in Africa and the second largest natural gas producer on the continent[20], making it an attractive venue for addressing India’s increasing oil demands. Politically, India and Egypt has exhibited mutual support and alliance on key issues pertaining to a range of contentious issues. For example, Prime Minister Manmohan Singh has voiced support to the Palestinian cause and acknowledged President Morsi’s role in trying to forge unity and his work towards a peaceful resolution between Palestinian groups Hamas and Fatah. Both sides condemned the violence and the urgent need for a peaceful resolution through dialogue and agreed to increase coordination in various international forums such as the United Nations and the Non-Aligned Movement.

Since the overthrow of former President Hosni Mubarack, the U.S. policy towards Egypt has been ambiguous at best due to the reluctance of engaging Islamist-leaning President Morsi. This has been a core reason for U.S. foreign aid being withheld.  U.S. foreign aid to Egypt is about US $1.3 billion annually, but only about US $200 million goes to improving economic conditions[21]. The disproportionate about of U.S. aid that is allocated for military spending when the need for infrastructure and job creation is urgent sends mixed signals to the Egyptian people about U.S. support for democratic transition[22][23][24]. Skepticism is deepened by the U.S. relationship with Egypt during the Mubarack era, which was characterized as a patron-client relationship whereby U.S. interest and Mubarack’s hold on power were placed above the everyday Egyptian. Until the U.S. sorts out its ambiguous foreign policy, it will continue to lack credibility with the nation’s people. India represents a new start for Egypt, as it can draw upon its historical legacy built on the personal friendship during the 1950s between then-President of Egypt Gamal Abdel Nasser and Prime Minister of India Jawaharial. Their political alignment as founding members of the Non-Aligned Movement also makes India more credible and palatable to President Morsi, the Muslim Brotherhood, and the opposition.